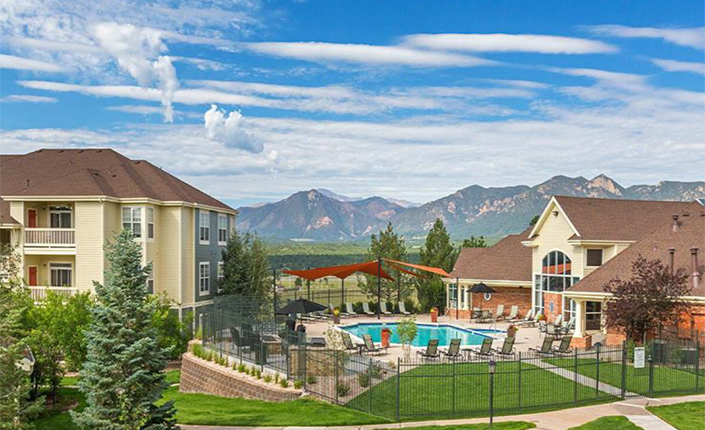 Newport Beach-based Buchanan Street Partners is ramping up its multifamily portfolio outside of California.

The latest purchase is RidgePointe at Gleneagle, a 240-unit community on 15 acres. It traded hands for $54.5 million, or nearly $228,000 per unit. The 13-building property was 95% leased at the time of sale. The seller was locally based Griffis Blessing.

The commercial real estate buyer and lender pointed to Colorado Springs as “one of the hottest housing markets in the U.S.,” bolstered by its large share of millennial residents. The city has the sixth-highest share of millennials in the nation, according to news reports.

Buchanan Street plans to renovate public and private spaces at RidgePointe, built in 2002, to “match and compete” with newer projects in the submarket.

Colorado’s been a large source of business for Buchanan Street of late.

It was the largest sale of the year in that city, Buchanan Street said.

The company has also been snapping up rentals in Utah over the past few years, picking up more than 450 units in and around Salt Lake City.

Buchanan CEO Robert Brunswick pointed to “demographics and job growth” as compelling reasons to invest in these markets.

“We continue to see tremendous growth and investment opportunity in these western regions,” Brunswick said.

Buchanan Street turns 20 this month; the company said it has invested more than $6.7 billion in real estate debt and equity investments since it was founded.

Other recent transactions include the nearly $44 million sale of an office property in the Phoenix area, sold to Boston-based Albany Road Real Estate Partners.

Its lending business has also been active of late, with three closings totaling more than $50 million.

The three loans include construction financing for a Las Vegas multifamily development; a renovation of an Aliso Viejo office building for Corona del Mar’s Redwood West; and a $20 million bridge loan for a 74-acre entitled mixed-use project in Ontario, being headed by a frequent Buchanan borrower.

The trio of new deals bring Buchanan’s total mortgage business to more than $1 billion, according to Brunswick.

This article originally appeared in the Orange County Business Journal