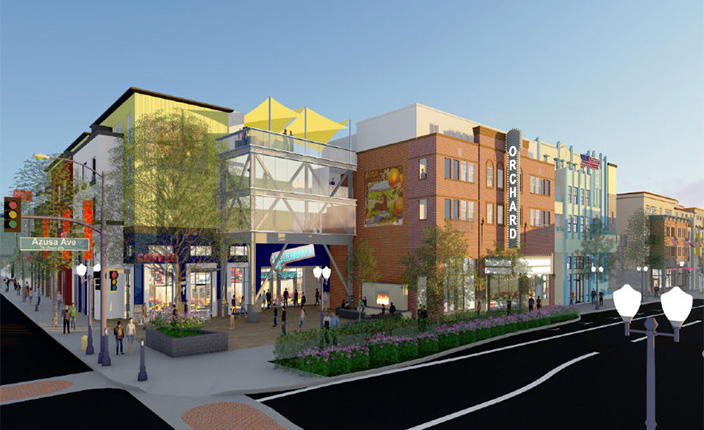 This article originally appeared in the Los Angeles Business Journal

The Orchard, a 163-unit, mixed-use development with a Laemmle Theater, will open in 2020.

A $76.3 million loan was granted for The Enclave, a 306-unit multifamily building at 13801 Paramount Blvd. in Paramount.

A joint venture of MWest Holdings and BentallGreenOak received the funding, which will be used to acquire and renovate the property.

The companies acquired The Enclave from Bridge Investment Group in December for $99.3 million, records from CoStar Group Inc. show.

“We’re excited about The Enclave purchase as it is in line with our broader acquisition strategy in the Los Angeles market, and is an ideal value-add purchase in an excellent location for driving demand,” MWest Holdings President Karl Slovin said in a statement.

The Enclave was 95% leased at the time of the sale, according to data from CoStar.

“PCCP is pleased to provide a senior loan to this experienced joint venture, which marks its seventh project together,” Ron Bonneau, managing director with investment fund, said in a statement.

“This is a well-performing asset in a submarket that is less than 3% vacant and has seen virtually no new supply over the past 20 years,” he added. “The property’s attractive physical characteristics, central location, and relatively affordable rents are anticipated to drive demand over the coming years.”

The Enclave is one of only six market-rate multifamily properties with more than 200 units in the Paramount, Norwalk, Downey and Bellflower area, according to PCCP.

The apartment complex was built in 1991 and is the only property with more than 50 units developed in Paramount in the last 30 years, according to PCCP.

The complex has six residential buildings with one-, two- and three-bedroom units and a recreation building. It also has a fitness center, a pool and a dog run.

According to CoStar data, The Enclave was the highest-priced sale in Paramount in 2019, followed by the $64.7 million recapitalization of a StorQuest Self Storage and the $16 million sale of an apartment complex at 13202 Downey Ave.

In Azusa, a $55 million nonrecourse loan was granted for The Orchard, a 163-unit mixed-use development project that will be home to a 3,500-square-foot Laemmle Theater.

The Orchard sits on city-owned land. Azusa put out a request for proposals and awarded the project to Serrano Development Group, which has broken ground on the development.

George Smith Partners’ Jonathan Lee said the loan was unique for a couple of reasons.

Serrano Development Group, he said, wanted a nonrecourse, high-leverage loan which took a while to close.

“A lot of construction lenders want a recourse or only provide recourse loans,” Lee said. “The fact that they wanted a nonrecourse one limited the pool of lenders,”

Serrano Development Group also wanted security so that in the event of a default, the lender could not force the developer to put up the money to complete the project, a term many other loans have. George Smith Partners negotiated a $6 million completion guarantee.

The project is expected to be completed in spring 2020.

“It’s a pretty big project: 163 units, mixed-use and should bring a lot of traffic at night to downtown Azusa, which the city is excited about,” Lee said.

“The project is half a block away from a Gold Line stop,” he added. “Of all the apartment buildings being built along the Gold Line right now, we are going to provide the lowest cost per unit. We are excited about bringing what we think is an affordable product onto the market.”